I focus on three major questions: how many species exist in a given system (species delimitation), how are those species related (phylogenetics), and how has their evolutionary history been shaped by landscape features (phylogeography) or ecology (molecular ecology)?

Why study evolution in Madagascar?

Madagascar is a natural model system for studying evolution and diversification. It is located about 400 km off Africa's southeastern coast, and is sometimes called the "8th continent" due to its long history of isolation and its unique biota. Madagascar is a top biodiversity hotspot with remarkable levels of both species richness and endemism, including 100% endemism of its 105 terrestrial mammal species (Goodman & Bernstead, 2005). Despite its apparent proximity to Africa, only four lineages of mammals were able to colonize the island: tenrecs, carnivorans, lemurs, and nesomyine rodents. Evidence suggests that each of these native groups radiated from a single common ancestor between 18-65 MYA (Poux et al., 2008). Scientists are not yet sure what cause the in situ diversification of Madagascar’s biota, but they have several hypotheses related to climate (Pearson & Raxworthy, 2009), rivers (Wilmé et al., 2006), and mountains (Wollenberg et al., 2008).

​What is a tenrec?

Photo credits: Steve Zak, Steven Goodman, Link Olson
Tenrecs are small- to medium-sized placental mammals in the family Tenrecidae. Today 32 living species are recognized, all of which are endemic to the island continent of Madagascar. All tenrecs are believed to have evolved from a single species that colonized the island from Africa between 35 and 50 million years ago. Since then, tenrecs have undergone an incredible radiation and now exhibit enormous ecological and phenotypic diversity. They include semiaquatic, semifossorial, and scansorial ecomorphologies; heterothermic as well as homeothermic physiologies; short, velvety pelage to stout, barbed, detachable spines; and body sizes spanning three orders of magnitude (2-2000 grams; Goodman, 2003). The tenrecs have also undergone spectacular convergent evolution with moles, shrews, otters, and hedgehogs, as reflected by their common names (e.g. mole tenrec, shrew tenrec, etc.), but are in fact more closely related to elephants and aardvarks than their namesakes. 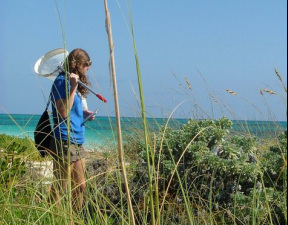 photo credit: Dr. Carol Landry
I worked with Dr. Kevin Winker and other colleagues at the University of Alaska Fairbanks and UA Ornithology Collection on a project reconstructing the phylogenetic and demographic histories of thrushes (birds) in the genus Catharus. This work was published in 2018 in the journal Molecular Phylogenetics and Evolution.

My senior honors thesis as an undergraduate was a study of the evolution and geographical distribution of the Woolly Mouse Opossum (Marmosa demerarae), a small South American marsupial. Working at the University of São Paulo (USP) with Dr. Alexandre Percequillo, we showed that populations on either side of the Madeira River in the Amazon rainforest are morphologically and genetically distinct. I presented my research at the 2012 Denman Undergraduate Research Forum and published my complete thesis with The Ohio State University.

In 2011 I conducted an independent research project on the reproductive biology of Bay Lavender, a common dune plant on San Salvador Island in the Bahamas (advisor Carol Landry). I concluded that Bay Lavender serves as a key foraging plant for at least 12 insect species from three orders and that self-compatibility makes Bay Lavender a good pioneer species, with the ability to colonize new dunes with just one or a few individuals (especially important after a hurricane).

During my first two years at Ohio State (2009-2010) I worked as a Research Assistant in Dr. Kristin Mercer's Plant Evolutionary Ecology Lab, where I participated in studies of gene flow and hybridization between wild and domesticated sunflowers. I also worked as a Research Assistant in Dr. James Bauer's Aquatic Biogeochemistry Lab during my last two years of college (2011-2012). There I learned carbon dating and nutrient analysis methods and used them to study organic and inorganic inputs to aquatic systems. Finally, I spent my summers as an undergraduate working as an assistant at OSU's F.T. Stone Laboratory and Biological Field Station on Gibraltar Island in Lake Erie.